Shamans are magic users that utilize wind and lightning to slow down their enemies. In dire situations, they have restorative spells at their disposal.

The shaman is a healer and support class that excels at aiding the injured while revitalizing themselves and others. Imbued with elemental powers, the shaman works with the forces and energy of nature to provide relief to those stricken by the wounds of war.

Born and raised in the mountainous and forested kingdoms of the Gold Kirin Tribe, shamans, like fighters, grow up in harmony with nature and the elements. However, unlike the fighter, the shamans respect and reverence for the natural world resides not so much in its majesty, but in its ability to provide seemingly endless amounts of elemental powers, which when tapped and harnessed, provide healing energies far beyond the imaginable. 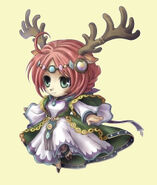 Retrieved from "https://glorydestiny.fandom.com/wiki/Shaman?oldid=13215"
Community content is available under CC-BY-SA unless otherwise noted.